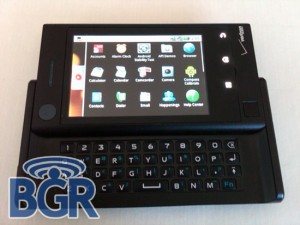 Here we go again.Â  The Boy Genius Report has the first “in the wild” shots of the Motorola Calgary handset, headed for Verizon.Â  Presumed to be arriving later this year, the phone looks very much like a less expensive, little brother to the Droid. Like T-Mobile‘s CLIQ, this handset will have MOTOBLUR as the user interface.

We have to admit that we’re not big fans of the keyboard.Â  What appears very cheap and basic has plenty of wasted space.Â  Let’s hope this is not the finished product.Â  On the other hand, this could be the kind of sacrifice needed in order to bring about sub-$100 Android phones.Â  There is no indication as the price or launch date but you can bet it’s right around the corner.

A few specs gathered by BGR include: