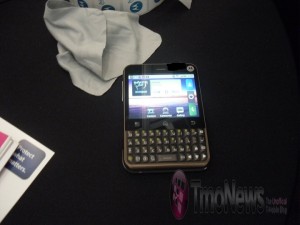 Don’t tell your school-aged kids and siblings, but some retailers are already considering this to be back-to-school time.  Having said that, it would be no surprise to learn that T-Mobile  stores have started receiving their shipments of Charm demo handsets.  As we mentioned earlier this week, the yet-to-be-announced phone was tipped for a back-to-school promotion which should see the handset going free after rebate.

According to a TmoNews source, the device features a touchpad on the back of the device, very similar to what AT&T’s Backflip has.  Aside from that, nothing else new was gleaned from the hands on.  Look for more details to emerge over the coming weeks ahead of its assumed late-July release.