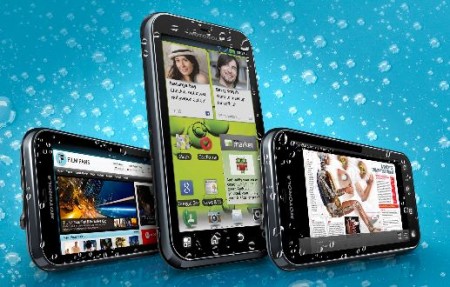 Motorola officially announced the Motorola Defy+ last month which is successor to their famous rugged Android powered device known as Motorola Defy, and it comes with some slightly upgraded features. The device was announced for Asian, European and Latin American markets. It would appear that the phone is finally on its way to the UK as BuyMobilePhones.net is now offering pre-orders for the Defy+ on contract. Interested users will be able to get the Defy+ with service from carriers like Vodafone UK, O2, Orange and T-Mobile UK. The phone is free and if you’re looking for the cheapest plan, it appears to come from O2UK, which starts at £10.50 a month. Additional plans along with pre-orders are available on the site so check it out and find the one that’s right for you.

Defy+ comes with a new and improved 1 GHz processor, Android 2.3 Gingerbread and Motorola’s custom UI known as MotoBlur. The Defy+ also boasts a better battery, and a stronger, tougher build quality than its predecessor. Another great deal on the Defy+ comes from Clove, where they are offering it for £246, SIM-Free.

So anyone planning to get one? Share your thoughts with us about the Defy+ in the comment box below.