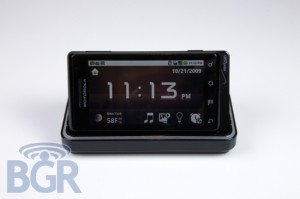 The hottest phone on the planet right now is the Motorola Droid and nobody has had more exclusive facetime with the handset than Boy Genius Report.Â  Nearly every bit of information pertaining to this handset has come out of the BGR camp, including today’s “preview” review of the unit.Â  The phone is all but announced, but the proper thing to do is say “things are subject to change with retail units.”Â  Getting that disclaimer out of the way, here’s what BGR has to say about the Droid.

The form factor of the Droid sounds like it will every bit as strong as we’re hoping.Â  Aside from the beefier inside specs, the outside design is everything the CLIQ isn’t.

Really solid and it seems to be manufactured very well. The slider is not spring-assisted, but when you push the metal bezel around the gorgeous display upwards, you get a satisfying click. It does the same when you slide it closed as well.

The 3.7″ screen really delivers the goods in terms of color, resolution, and responsiveness.

Itâ€™s the largest capacitive screen weâ€™ve ever seen and itâ€™s positively amazing. Itâ€™s crisp, sharp, vibrant, bright, and really, really responsive…doesnâ€™t seem like it would scratch easily regardless of the material… shows off Androidâ€™s true colors.

The keyboard is good, not the greatest – better than the G1 but still not perfect.

The directional pad on the right is a little weird at first but it doesnâ€™t hamper your typing too much, but there isnâ€™t enough tactile feedback to make it perfect. Something thatâ€™s a little annoying is the proximity of one key to another key, but all in all weâ€™ve been able to bang out emails, texts, and other forms of text entry very efficiently on the hardware keyboard very quickly after using the device.

Boy Genius loves Android 2.0 and thinks we’ll all be fans of it too.Â  The unified inbox and Exchange support get good marks from him and we imagine everyone else will be on board with it.Â  He claims the battery is the best of any Android handset so far, completely blowing the CLIQ out of the water.Â  As noted in his preview, there is nowhere near the amount of background processes going on being that it doesn’t run BLUR.

We also get our first glimpse at the docking station/cradle that is said to be available at launch.Â  Plug your Droid in at night and turn the phone into a bedside alarm clock and media player!

If there’s one thing you can count on with BGR, it’s that he doesn’t mince words.Â  He’s not afraid to say what he’s feeling, even at the risk of alienating fans.Â  What’s his verdict on the Droid?

Once you move past the initial â€œwowâ€ factor, the Droid really delivers…So will the Motorola Droid be successful? Absolutely, we think. It will eat in to BlackBerry sales, Windows Mobile sales, and positively murder any lingering Palm Pre sales. Itâ€™s that good.

We grabbed a handful of pictures from BGR’s preview to share with you.Â  If you’d like to see size comparisons of other handsets like the iPhone and BlackBerry, be sure to swing over there after you’re done here.