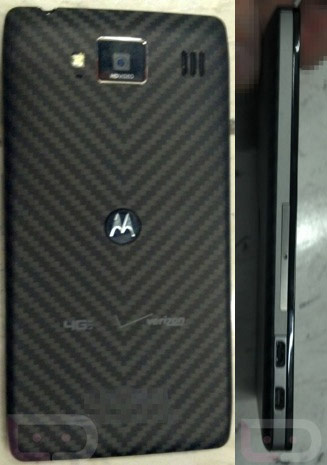 About two months ago, we saw the first shot of the Droid RAZR HD, and now Droid-Life is back with some more images and information about Verizon’s next big monster. The image above tells us that it’s coming to Verizon for sure, and it will also feature Verizon‘s 4G LTE. Also, it’s rumoured that it will feature a 13.1 megapixel camera with LED flash. According to the Droid-Life source, the display on the device is “amazing”, and we heard that it’s a 4.6 inch 720p display. There’s also a 3300mAh battery behind the battery cover. Rumor has it that it’s running on Qualcomm’s 1.5GHz dual-core Snapdragon S4, but we would like to wait to make this claim, as it’s not confirmed yet.

There’s a micro-USB and micro-HDMI port on the side, and hopefully we will see it sometime later this summer. No mention on the price right now, but it will probably cost around $200-$250 on a contract. Who’s interested in this upcoming monster from Verizon? Tell us what do you think in the comment box below.