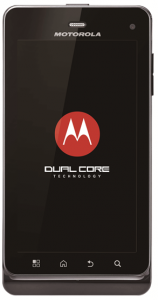 Motorola Mobility announced the third model in their popular Milestone series of handsets today, giving official clues as to what we can expect out of the Droid 3.  China Telecom is slated to offer this thinner, faster XT883 when it’s released later in the third quarter (Q3 ’11).  Details for this third Milestone include a 4.0-inch qHD display, sliding QWERTY keyboard (5 rows!), dual-core processor, and 8-megapixel camera.  Of course, there’s also your general Android stuff like GPS, Bluetooth, Wi-Fi, and microSD support.

The XT883 is also notable because of its world roaming ability.  Like some of Verizon‘s recent Android handsets, this Milestone offers calling capabilities in more than 200 countries.  No word on pricing yet, but that will come out in due time.

Read more on the XT883 at Motorola Mobility.

Motorola Droid 3 is now on sale