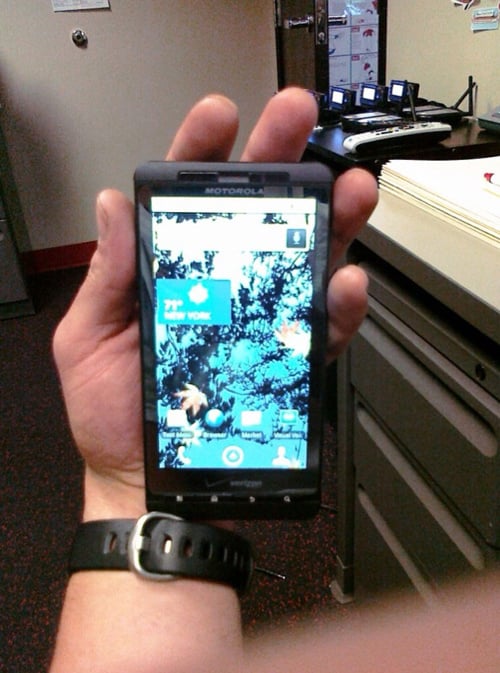 First Gizmodo acquired an iPhone that was “left” in a bar. Now, Gizmodo decides to post a picture of the Verizon branded Motorola Shadow, or whatever they’re gonna end up calling it, which was apparently, “left” in a gym. Since when do prototypes get lost and found so frequenty? And more importantly, when did smartphones start going to bars and working out? Maybe these phones are so “super” that they’ve learned to sprout legs and flee their masters. Or, perhaps lost phones are just becoming the new blurry-cam leak.

Either way, this phone is a beast. I was surprised that there doesn’t seem to be a hardware keyboard. Motorola really seems to be pushing into HTC territory with this bad boy. Here’s what we’ve now confirmed about it:

I ‘m gonna go out on a limb and assume that the screen will not be of AMOLED origin. The picture seen above makes it seem a bit washed out and back-lit (but this could just be due to the lighting or camera). We’ve also yet to see a 4.3″ AMOLED screen put on a phone, leading me to assume there’s a technical reason behind it that we’re just not aware of. For now, everyone seems to be sticking with LCDs for these super-sized phones (aside from the 4″ Super AMOLED found on the Samsung Galaxy S). However, in this case, I’d love to be wrong.

Verizon customers can expect this device to launch around June or July time. Anyone interested?