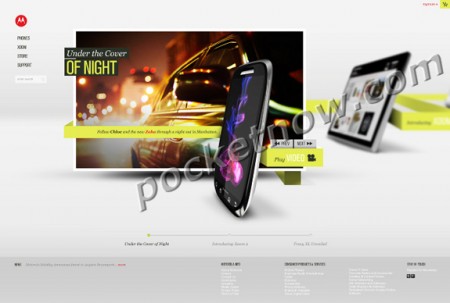 Oops.  Motorola is more than likely spending the evening trying to get the proverbial toothpaste back into the tube tonight as four of their upcoming products were just outed.  Our first official glimpses of the XOOM successor and three other devices come courtesy of Motorola, who, we’re told, are in the middle of a website redesign.  Chances are that someone accidentally set things to go live rather than saving in the background, but whatever the reason, we don’t really care.  What we do care about are these new future Android products.

While the XOOM 2 is never shown clearly, we get the sense that it’s thinner and hopefully lighter than today’s model.  Given the super thin size and portability of the Galaxy Tab 10.1 and other similar products, Motorola’s XOOM feels more than bulky.

We’re treated to a pair of ultra-thin handsets in the Zaha and Slimline although their specs are never mentioned.  Based on the pictures however, we can see these will rival the Galaxy S 2 in terms of how thin they’ll be.  The Slimline has more square-ish shoulders that remind us of the Droid line while the Zaha has the making of a sexier Bravo or Citrus.

And then there’s the Tracy XL, which looks like a Dick Tracy watch from tomorrow.  Likely powered by Android, this could go either way as an A) full on Android experience or B) accessory for handsets and tablets a la the Sony Ericsson LiveView.

The pictures aren’t the greatest and there are no specs to drool over but we don’t care.  We’re excited to see what Motorola is working on and can’t wait to learn more about any and all of these.

It’s worth pointing out that PocketNow has since yanked the pictures down after a request from Motorola Mobility.  We’re hoping we can keep them up here seeing as how many of our favorite tech sites are sharing the leakage right now too.