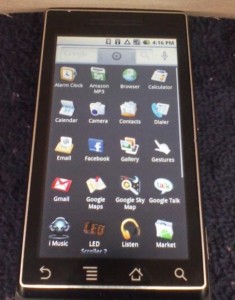 A super secret document made its way into the hands of Taylor and company over at AndroidAndMe which outlines the plans for Motorola’s Tao handset.Â  We’re being treated to some insider information that sheds light on what to expect from both Motorola and Verizon.Â  This phone definitely plans to deliver the goods.

Rumored to drop December 1st, the Tao is being billed as the world’s thinnest slide QWERTY phone at 13.7mm thick.Â  Other details include a 3.7″ touch screen with 16:9 ratio, 16GB on board storage, Flash and a little something called Android 2.0, whatever that is.

There’s mention ofÂ  a dock that transforms the phone into a beside clock, digital picture frame, or bedside clock. Â Â  From the sounds of it, the Tao will come with it in the box. Â  There are tons ofÂ  little goodies in the document – Too many to list out here.Â  If you’re into things that get Android fans excited, then might we suggest reading it for yourself?

If you’re looking for the full-on spec list, we have that for ya.Â  Here’s what we have so far.Â  You’ll note that some of it is a little conflicting.

The list we were passed does not indicate the dock, nor does it match up in terms of on board storage.Â  Also noteworthy is that this is not going to have MOTOBLUR, the new interface developed by Motorola.Â  This matches up with the pictures we’ve seen so far.

Hang on folks, this is about to get really fun!