Motorola is no stranger to running deals for some of its inventory over holidays. Valentine’s Day is still a couple weeks away, but the manufacturer isn’t wasting any time. Let’s check out what offers Motorola is using to show you its love.

This is probably the first deal that we’ve seen for the 2nd Gen. Moto 360. It’s not a discount off of the asking price, but rather, an incentive. If you purchase the Moto 360 right now, you can throw on a metal band and get a leather band for free.

This is pretty sweet if you like changing up your look from time to time. The 2nd Gen. Moto 360 makes it easy is switch out bands (it’s just a latch on the band that pops it off). The free band is a savings of $40.

The Moto G offer is a similar deal. You won’t get a discount on the asking price, but you’ll get an accessory for free. Actually, in this case, two free accessories: two extra back covers to change up the phone’s look.

Recall that the Moto G allows the user to pop off the back cover and switch out with another from a multitude of colors.

Each shell runs $15, so you’re looking at a $30 savings if changing up your phone’s appearance on a whim tickles your fancy.

Lastly, the Moto X Pure Edition is getting some love as well. Motorola recently teamed up with a renowned designer, Jonathan Adler, for three unique back cover looks. The limited edition phones normally run at a premium ($475), but right now they’re at the same price of a normal Moto X Pure Edition ($400). 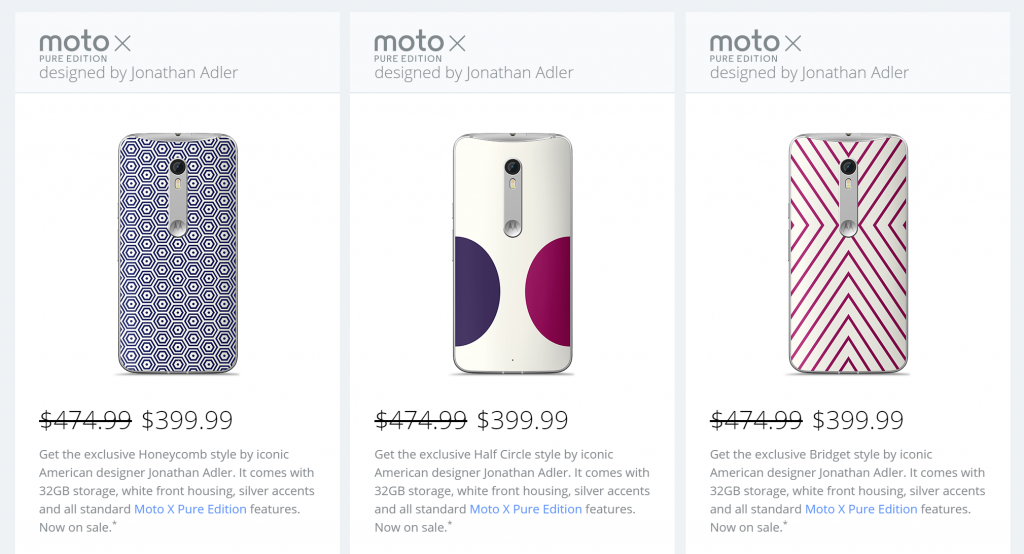 Bear in mind that these offers run through Feb. 16th at 10:59a.m. CT. Hit up the source link below to get to the deal’s launch page.