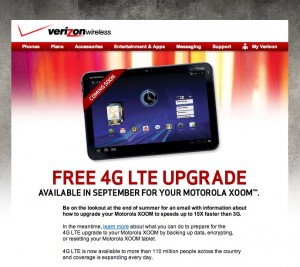 It’s been 5 months since Verizon released the Honeycomb packing behemoth known as the Motorola XOOM. Early adopters were slapped with the disappointing news of no Flash support, no SD card support, and no LTE support. Of course Big Red promised said functionality would be coming soon and that customers would be able to upgrade to LTE at no additional cost. Many customers figured the trade off would be worth it to have their hands on Android’s newest tablet OS while others opted to wait for the Wi-Fi only model.

We’re now creeping into the month of August and still no sign of LTE support, Wi-Fi only models just received SD support (3G models still waiting) and to add insult to injury, Verizon will be releasing the 4G LTE Galaxy Tab 10.1 tomorrow! Ouch!

So what’s the good news? Well, today Verizon started sending out emails to XOOM customers informing them that they can expect their free LTE upgrades to be available in September. Really? September!? Gee thanks…

I’d like to know how all you 3G XOOM owners feel about this? Are you pissed that Verizon is putting this off another couple months, especially since they are releasing a 4G tablet tomorrow? Have you already jumped ship on the XOOM or are you just happy to finally have confirmation of LTE’s arrival? Let us know in the comments and don’t hold back, let it all out.