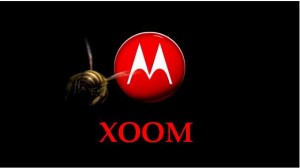 Here we are, the tablet wars are about to erupt with the release of the Motorola XOOM on February 17th. How does the flagship Android 3.0 honeycomb device stand up to the original iPad?

I know the iPad is an older device, so comparing the two is a bit unfair. The iPad 2 is in the works, but currently the original iPad  is Apple’s only tablet that we can compare against. Which one is better? Read below and make your decision.

Here’s a side by side comparison chart of the Motorola XOOM and the original iPad via Droid Life. 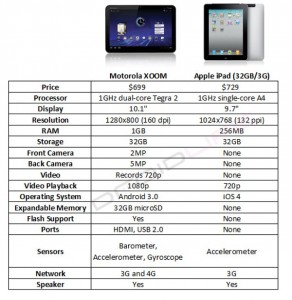 Side by side it’s no question which one is better. By specs, the Motorola XOOM outdoes the iPad hands down. Moto has matched or one-upped the iPad on every spec. But Apple does have an iPad 2 in the works, likely to be released in the first half of the year. We dug up some of the rumored specs on the next gen iPad to compare with the Motorola XOOM:

This comparison seems to be less of a no brainer, but in my opinion the XOOM is not only the better alternative to the original iPad, but will also give the iPad 2 a run for its money. Either way we clearly we will have some great tablets in 2011. Choose your sides: Android or Apple. Come on..it’s Android!

Motorola’s XOOM is scheduled to be released on Feb. 17th for $699 without a contract.