Mozilla just dropped us a line to advise that there’s a new version of the popular browser in the Google Play Store.  Geared more for tablets this time around, the update sees speed boosts across all fronts, including startup, loading, and zooming.  Also included in this go ’round is the Awsome Screen that brings all of your history, passwords, booksmarks, and other personal stuff. Additional details and fun Firefox fanfare is found below.

Firefox for Android Gets Speedy and Powerful Upgrade for Tablets

We’re proud to announce a redesigned Firefox for Android for tablet devices is now available for download in the Google Play store. The same dramatic improvements that made Firefox for your Android phone super fast are now available for tablets. You’ll notice everything is quicker, from startup and page load times to panning and zooming and Web app performance.

Firefox for Android makes it easy to get to your favorite sites with one touch with a personalized start page and a fresh, streamlined look. This release includes a new Awesome Screen that delivers all of your browsing history, bookmarks, passwords and form data. You can also import your personalized Firefox experience with Firefox Sync.

Firefox for Android supports Flash for Honeycomb tablet devices so you can interact with more Web video and games on the go.

To make browsing on your mobile phone or tablet even easier, Firefox for Android lets you switch between the desktop and mobile version of a website by selecting “Request Desktop Site” from the browser Menu.

Firefox for Android helps you easily navigate the mobile Web with a number of feature updates and stability improvements like Find in Page and Text Selection.

Based on the same open technology platform as the desktop version of Firefox, Firefox for Android ships with the highest level of privacy and security features in mobile browsing. Firefox respects your privacy and protects your security with features like Do Not Track, Master Password, HTTP Strict Transport Security and more.

New HTML5 capabilities in Firefox for Android enable developers to create rich Web apps and websites based on HTML5, JavaScript, CSS and other open Web standards. As the advocate for the Web, Mozilla exposes new Web APIs and submits them to standards groups to move the Web forward as a platform. Among the standards that Mozilla helped build are Camera API, Vibration API, Mobile Connection API, Battery Status API, Screen Orientation API and Geolocation API.

Play Mozilla’s HTML5 BrowserQuest multi-player role playing game across desktop and mobile Web experiences to see just how powerful, fast and fun the Web can be. 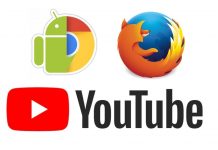 Want to play YouTube in the background of your Android? Here’s how