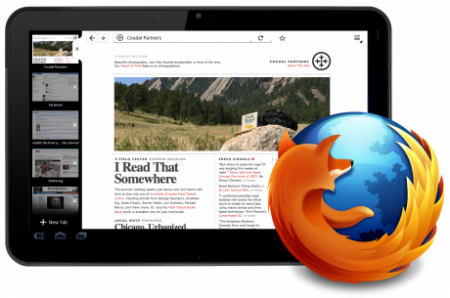 As many of you know Mozilla has continued to evolve their webs browser for Android phones over the last few months, adding new and awesome features every time out.  And as some more astute followers will recall learning that Mozilla is working to bring the same level of beautiful functionality to Android tablets.  Ian Barlow, a Visual Designer on the Mobile UX team has taken to his blog to highlight some of the great things that await Honeycomb users.

According to Barlow, Mozilla has blended the minimalist design of Honeycomb with some of Firefox’s familiar (and signature) elements.  The browser takes advantage of larger screen sizes by bringing tabs and other helpful features to the front rather than hiding them behind the screen.  Most Firefox mobile users might not know it but there’s an awful lot that’s hidden away because of the 3.5-inch to 4.5-inch screen size.