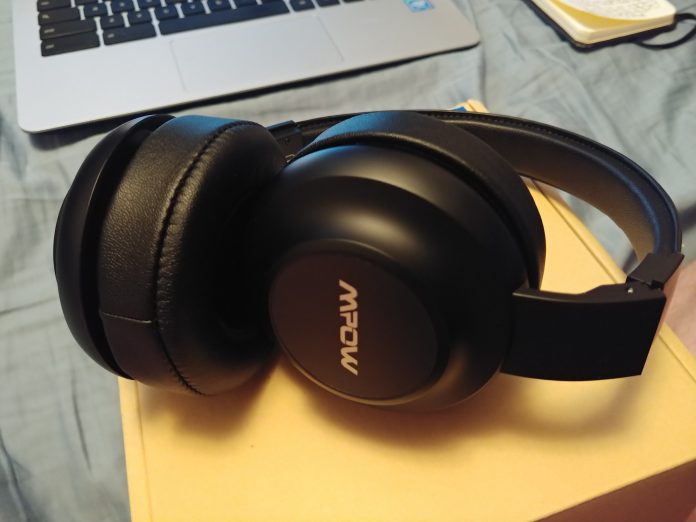 The running theme of this review is going to be pretty consistent across the board; adequate, but unspectacular.

Opening the Mpow H2 is non a religious experience. You open the plain, manila-colored box and they’re just laying there, protected by a clear plastic baggy. The unit itself is also plain, with a matte-black plastic chassis and leatherish cushions for your ears and head. Each earcup can fold up into the band, but only one can be folded at a time, and even at it’s smallest it is not much smaller than fully extended. The on-ear design will always flummox me, as it pushes against your ear rather than wrapping around it or sitting within it. Some might find it to be a nice balance between the two of those, but I personally would prefer either of the extremes to the half-measure. There’s a 3.5mm port on the Left cup and a MicroUSB port for charging on the Right – as you’d expect.

All of the controls are on the Left earcup – five buttons, in a square-and-center formation; Power, Play/Pause/Call, Equalizer, and Volume Up and Down. Even scouring the rather pointlessly thick instruction manual, I have yet to figure out why there are five buttons on this headset. In an era where buttons can be tapped, pressed, double-pressed and long-pressed, and a single dial can raise or lower a volume, I see no reason why this unit need have more than two buttons and one dial – Power/Play/Pause/Call (depending on context), the Equalizer button (which as you’ll see later, is rather useless), and a volume dial.

But, as usual, I digress.

Overall, for an on-ear headset, the H2’s are comfortable. They feel solid both in-hand and on-head, and never feel at risk of falling off even while in motion. The extenders on each cup are a bit stubborn, so I’d recommend adjusting them once and leaving them that way.

Pairing the H2’s is pretty simple. Turn them on, find them in your Bluetooth menu, connect. There’s no bells, no whistles, and no hassle. If only operating the thing was so simple. With five buttons on the Left cup, remembering the location of each and then finding the one you want is an adventure, even after using them for a week. I’m sure eventually you’d have enough muscle memory to know where each button is and what it does instinctively, but be prepared for a steep learning curve.

The H2s feature Bluetooth 4.0, which – while a couple versions behind the bleeding edge – is still a modern standard. They can pair to two devices at once, which is an interesting feature, but one that’s not particularly useful in a real-world scenario. The leatherish earcups provide rather nice passive noise cancelling, both in terms of keeping sound out and in terms of making sure the music doesn’t distract those around you.

When it comes to sound quality, the H2’s are a mixed bag – while the clarity of sound and volume are excellent, there seems to be a distinct lack of depth to all sounds, and not much bass to boot. The Equalizer settings are no help, either. There are four of them – Natural, Heavy Bass, High Pitch, and Rock – but none of them really provides the added depth you’d want (and expect) in a larger headset.

With a 400mAh battery and 13 hours of play time, the H2s should provide plenty of perfectly average musical listening, and the MicroUSB charging means you’ll never have to look too hard for a charging cable – until USB-C dominates the world, at least.

To be perfectly honest, I was pretty disappointed in the H2s. They are perfectly adequate in most every way – dubious design snafus notwithstanding – but they don’t have a single feature that really set them apart from every other headset on the market. At $34.99 on Amazon, they certainly won’t break the bank, but for all you audiophiles out there, you can do a whole lot better at the $50 price point.