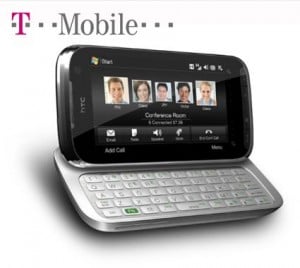 After not owning a Windows Mobile phone for about five years I decided to take advantage of a promo that I heard about on TmoNews and ordered a comp’d Touch Pro2 just for adding a new line with the text plan.Â  I decided to have an open mind about WinMo 6.1 and HTC’s TouchFlo layer and looked forward to my new arrival.

First off, pictures and even the demo/working models in the retail stores do not do this device justice.Â  It is a very serious piece of hardware with solid clicks for opening and closing, and the tilt screen is very handy when using the TP2 as a PMP.Â  It has a great feel in the hand and has a little heft to make you aware that of its enterprise prowess and makes my trusty G1 look like a cheap knockoff straight out of China.Â  I have to believe that HTC had less to do with that design than Google did because they can build some nice gear.

The keyboard is the best I have ever used on a phone and is second to none but without a D-pad or trackball I was left wanting for an extra interface for navigation.Â  The resistive touch screen is better than I remember on previous Windows devices going all the way back my first Compaq iPaq and my one-night stand with an HTC Wing, but it is still not up to par with my G1 and MyTouch 3G.Â  Touch screen devices just beg for a capacitive screen and clearly cannot compete here with WinMo 6.1.Â  Only the resolution of 800×400 justifies it being resistive and the video playback was very nice as I tested it with several feature length movies. After having Android devices for the past year, I am used to entering my Google credentials and just having all my Gmail, calendar, and contacts magically appear after a few minutes.Â  But much to my dismay, I had to use the onboard “Gmail” icon (not to be confused with the application) to download my messages via IMAP and the Microsoft ActiveSync settings for Exchange syncing to get my calendar and contacts.

TouchFlo adds a nice veneer to the OS except when you have to use the File Explorer, Settings, or Program groups.Â  Even after I downloaded PockeTwit, Facebook, and BeyondPod from the web since there is no current application market, the Touch Pro2 still could not keep up with my G1 or mT3G.Â  Without getting the certificate based VPN working I could not even get my work e-mail downloaded and I have been doing that with my G1 for months.Â  So who’s the supposed enterprise device here?

The internet setup is even more confusing with dueling browsers.Â  Mobile Internet Explorer and Opera Mobile are both loaded and I could not figure out how to make OM the default.Â  So when I surfed the web I used Opera but when I clicked on links out of e-mail and the Twitter app they would be opened in IE.Â  This could be confusing for new mobile users but is just plain insulting to seasoned veterans.Â  Another small annoyance was that I could not figure out how to keep WiFi alive.Â  Every time I would wake the phone up out of stand-by the WiFi would have to reconnect thus missing e-mail and Tweets when getting a low tower signal.

While this is not an indictment of the Touch Pro2 or Windows Mobile, the week I have lived with this phone has shown me just how good the 1.0-1.6 release of Android really is in comparison.Â  And with Android 2.0 waiting in the wings this OS has many iterations before leveling out in the near term.Â  There are thousands of users out there who use WinMo for specific and unique reasons but I am reminded even more of why I am indeed an AndroidGuy.