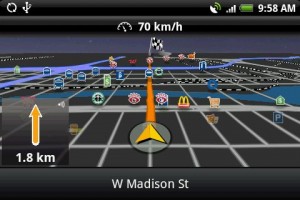 Navigon has announced the coming arrival of their MobileNavigator for both Android and Windows based phones. The program originally launched on the iPhone where it is one of the more popular navigation apps. MobileNavigator sports a number of interesting features, including the display of actual road signs on your phone and built in maps for use when there is no cellular coverage.

The Windows Mobile version will launch next week for the discounted price of $69.00, which will jump to the full price of $89.00 on February 14. The Android app will launch at some point in spring for a price that has not been set at this time. Seeing as new Android phones have the built in (and very effective in my opinion) Google Navigator, it will be interesting to see how much lower they drop the price, or if they try to force it into the market at $89.