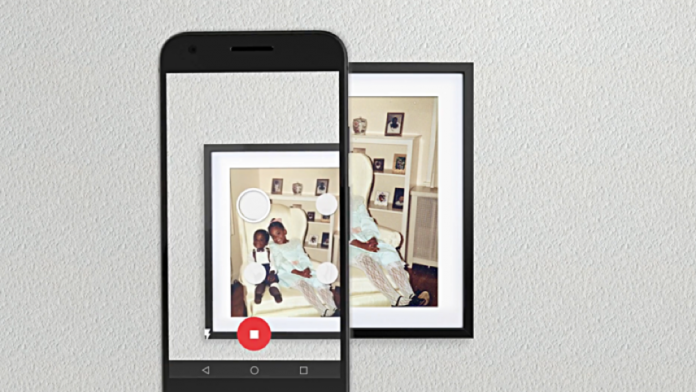 Google today released a new app from the Google Photos team called PhotoScan. It lets you skip the flatbed scanner and scan photos using your phone.

Although scanning photos with a smartphone isn’t a new concept, Google hopes to make the process easier than ever. When you open the app, you first take a picture (of a picture) inside of a frame. Then, a dot appears on each corner of your photo. Center your phone over each dot, like shooting a photosphere.

Once each dot is covered, the photo is scanned. Google applies its machine learning algorithms to remove any glare from the photo. Each photo is also automatically cropped, rotated and color corrected. You can have your photos uploaded to Google Photos or saved to your camera roll.

David Lieb, product development leader at Google Photos, told The Verge that the goal of PhotoSnap is to help people preserve their print photos in the cloud before they are lost forever.

“These photos are at risk…of being lost when you move, they’re at risk of fires, floods and theft. And with every day that passes they fade away a bit – they literally fade away.”

Google is combining this with an update to Google Photos that brings even more enhancement. The update improves auto enhance, brings 12 new looks that tailors the style to each individual photo, and adds Light and Color editing. Light editing lets you control exposure, contrast, whites, highlights, shadows and blacks. Color editing is all about saturation.

Both PhotoScan and the Google Photos update are rolling out to Android and iOS.

Behind The Scenes with Nat & Lo