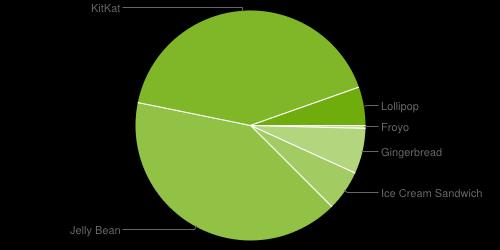 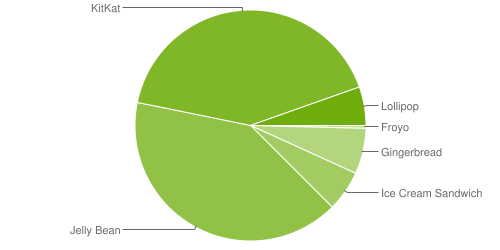 The Android Developers platform reveals that more than 4 in 5 devices run on KitKat and Jelly Bean. Specifically, they account for 82.1% of devices with nearly an even split between the codenames.

This data reflects only those devices running the latest Google Play app, which is supported only be devices running at least 2.2 Froyo. Any version with less than 0.1% distribution is not shown. The data was collected for a week until April 6, 2015.

Also, the dashboard provides information of the screen sizes and pixel densities of all these Android devices, as well as their OpenGL ES version. 82.9% have what is considered to be a normal screen size. Hdpi is the most popular pixel density with 40.2%. Only 0.3% run the latest 3.1 version of OpenGL ES, and 65.9% run the lowest variant of 2.0.