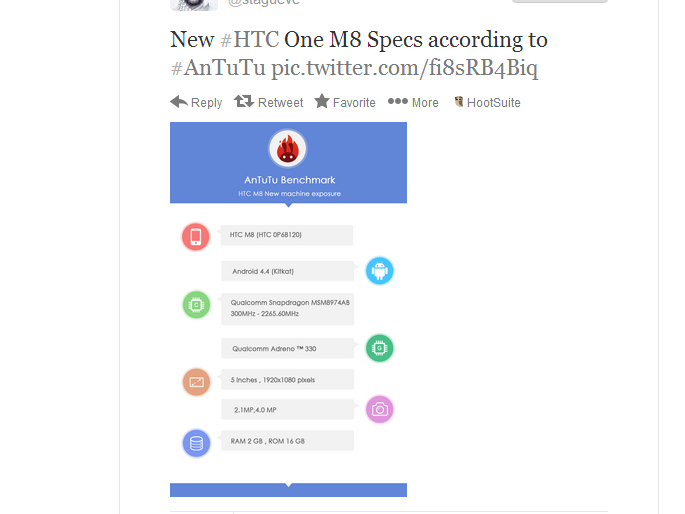 The HTC One was one of the hottest smartphones of this year. It made number one on many lists, got great reviews, and was one of HTC’s best selling smartphones. As we know, something this successful almost always gets a sequel, and in the smartphone industry, a sequel is also almost always better.

This successor to the HTC has been dubbed the HTC M8, or HTC One M8, according to the rumor community. Specs, features and designs for the HTC M8 had been first rumored in the summer, and the rumors have been updated. Recently a new benchmarks by AnTuTu have leaked, what will most likely be, specs of the successor to the HTC One. The AnTuTu benchmarks reveal that the HTC One will consist of:

Although most of this seems very likely, there is one aspect of the benchmark that caught the attention of many: the AnTuTu benchmark stated that the M8 would consist of a 4MP Rear-end camera. This may be done due to supposedly awe-inspiring new Optics in HTC Phones, a miscalculation done due to the new optics, or a false benchmark test.

Many rumors have been floating around about the HTC M8, and many are still to come. Unfortunately, the only sure way to find out specs, features and designs for the HTC One successor is from HTC itself.