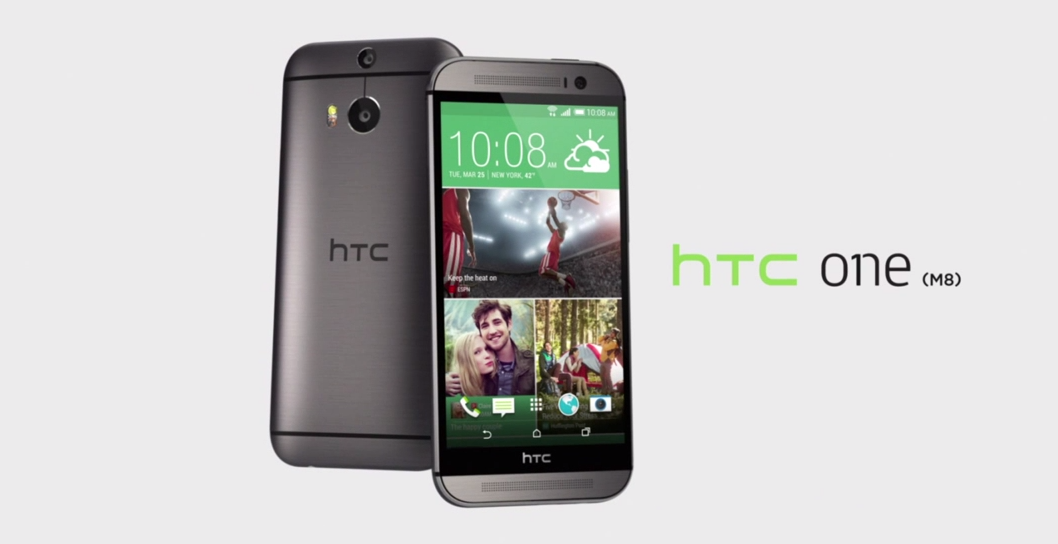 What has possibly been the most leaked phone to date, the HTC One (M8) is finally official.

The HTC One (M8) is sporting Android 4.4.2 KitKat and Sense 6.0, an updated version of HTC’s custom software.

Here are the official specs for HTC’s new flagship:

The HTC One (M8) will be available in Gunmetal Gray, Glacier Silver, and Amber Gold, all sporting the ever-popular metallic unibody. What’s more, is that the M8’s body is actually 90% metal, with a brushed metallic texture on the back. They’re keeping the same general look of the device with two front-facing speakers on the top and bottom of the phone, but adding on-screen navigation buttons this time around.

The battery has gone through some huge improvements, offering a 40% longer lasting battery on daily use. HTC also added an Extreme Power-Saving Mode, that can give you up to two full weeks of standby time. You can still access phone calls, text messages, and other basic functions of the phone while in this mode, but for the most part, functionality is pretty limited.

HTC added another camera on the back, dubbing it the Duo camera. It’s still the HTC UltraPixel camera that we’re used to, just with a second “depth camera”. The second camera is used to focus pictures after they’re taken and added improved focusing abilities. All you need to do is tap the photo and let it re-manage the focus for you.

They’ve also included a new camera layout, updated camera switchers, and improved speed. Slow-motion video capture has also been added, with the ability to slow down certain parts of the video after it has been taken.

A bit more on the camera interface is an updated image gallery with Image Mash, which recognizes peoples’ faces in photos and can tag them automatically.

HTC is opening up the camera API to developers to focus on depth software to see what new features others can bring to the table.

They’ve also added a simplified Zoe mode, where all the user needs to do is tap to shoot a photo and hold down the screen to take a video. Also, you’ll now be able to add personalized music to your Zoes after they’re created. And while we’re talking about Zoes, you will soon be able to upload your Zoes to the cloud to share and connect with other Zoe users. The new Zoe cloud feature will be available for Sense 6 sometime during the summer.

A bit has changed with the software and Sense 6.0 with the addition of some new gesture features and Blinkfeed 2.0.

You can now personalize Sense 6.0 with custom colors, making it a more personal experience. They also included a new Motion Launch feature, allowing you to swipe into Blinkfeed and recent apps, among others. You can simply hold the phone and press the volume down key to launch into the camera, as well as double-tap the screen to get a quick view of the time. Also, you can hold the ringing phone up to your ear to answer a phone call. More on Motion Launch to follow.

Blinkfeed 2.0 brings easier readability, custom feeds, and developer support. There are some new partners announced with Blinkfeed, including 4square and FitBit, integrating their services more fluently.

They’ve worked on improving the speakers this time around, adding a multi-band amplifier, resulting in clearer audio that is 25% louder than the original HTC One. We’re happy to see Boomsound made it to the phone, and that it will continue the great audio experience that we love about HTC products.

HTC has also added Sense and Blinkfeed to the Google Play Store in order for users to receive faster updates.

They’ve also outed an official accessory for the New One – the HTC Dot View case. The case is a flip cover that displays weather information and the time on the front of the case, in a beautiful dot-matrix pattern. Double tap your phone to get information sent to the case, and view calling information instantly. And they will be available to order with your new phone later today.

At 1PM Eastern, you can order the phone from Sprint, Verizon, and AT&T online, or from HTC’s Official site. For the Verizon customers out there, the phone will be available today in-store and for a limited time, if you purchase one on a two-year contract, you can get a second one for free! It will be available on-contract for $199 or $249, while the unlocked and developer versions are a hefty $649. You can also pick up a Google Play Edition for $699 from the Google Play Store later today.

Sprint and AT&T should have the phone in-stock before April 10th, but still be on the lookout for more carrier availability to follow in the coming weeks.