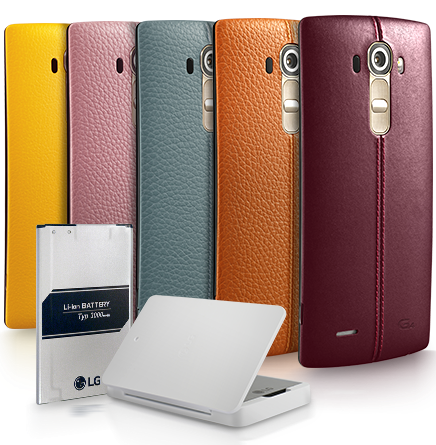 LG hasn’t been shy about prodding your temptation to buy their G4.  The flagship’s initial promotion included an extra battery and microSD card, and even received an extension to run until the end of June.  But now that it has ended, LG is quick to renew the deal and see if another goody might get you to make the leap.

The new promotion still includes a free battery and charging cradle, but forgoes the microSD card for a leather back cover.  You get to choose between five different colors for the leather: light sky blue, orange, pink, yellow, or red.

How it works is after you purchase a G4 (between July 1st and July 31st), submit your purchase details to LG (at least by Aug. 14th) and they will mail you the extras, within 4-6 weeks.  You must purchase your G4 from ‘participating’ retailers in the US, which does include the major carriers and common stores.

If you’re into leather back covers, did LG’s new promotion just strike a chord?  You have a month to decide.