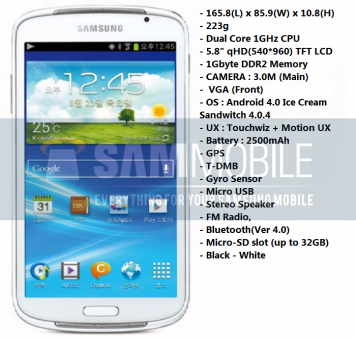 At the 2012 IFA event we are expecting to get, among other things, an announcement for a new Samsung Galaxy Player.  You can see from the image above that the design for the next model closely resembles  Samsung’s current flagship, the Galaxy S III.

This Galaxy Player is shown as having a very big 5.8-inch display, a dual-core 1GHz CPU, 1GB RAM, and other bells and whistles designed to offer top-notch media performance.  The unnamed device will come with Android 4.0.4 Ice Cream Sandwich as well as Samsung’s TouchWiz Motion UX.  Look for these to arrive in either black or white at a retailer near you.

So what do you think about this exciting new media player? Is it gonna throw the iPod out the window or just be yet another Samsung Media Player? Let us know in the comments below!