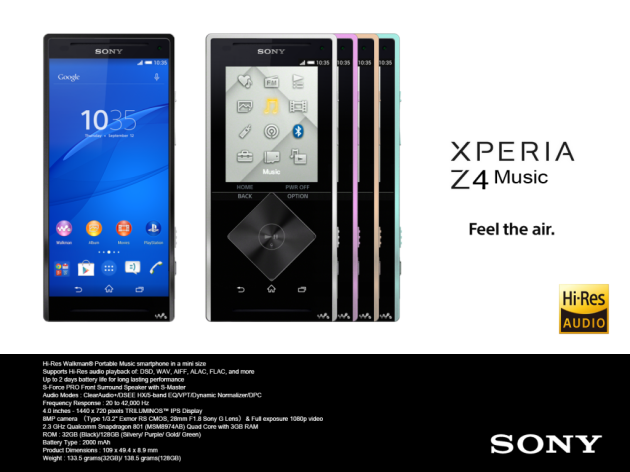 We all saw the Sony Walkman unveiled at CES, and with it also the rather steep pricing, because at over $1000, this thing is more expensive than most laptops. But could the device simply be a refresher of the Walkman name and not intended at all to be a device consumers purchase, but simply a memory jogger of a brand that holds its own in the music industry, in prep for a more affordable consumer device that bears the name Walkman.

This is exactly what the Sony Xperia Z4 may be marketed as – that expensive Walkman device we saw at CES 2015, but more affordable, and with a phone attached.

According to sources, the Xperia Z4 Walkman could feature a 4 inch display with a resolution of 720 x 1440. The handset is also rumoured to have the Snapdragon 801 SoC, 3GB of RAM, 32 or 128GB storage, an 8-megapixel camera on the back and possibly Android 5.0 Lollipop.

Whilst this doesn’t sound like the specs that you’d associate with a flagship device such as the Xperia Z4, it could be very reminiscent of a Xperia Z4 music variant of the device aimed at music lovers.

Mobile World Congress in Barcelona is just around the corner, where Sony are expected to make some big announcements, so keep your ears peeled for MWC.