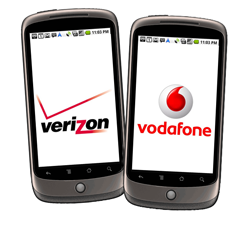 Since the day that the Nexus One was announced, Verizon and Vodafone customers have been anxiously awaiting the super phone on their respective networks.  With a promised “spring 2010” release, it appears spring might be in the air.  Recent rumblings and FCC documentation hint at releases for the carriers this and next month.

For Verizon subscribers, your wait may only be a few short weeks away.  A Neowin source familiar with the matter says that the nation’s largest carrier will be dropping the Nexus One on March 23rd at a price “competitive” with the T-Mobile version.  Being that this day also marks the kickoff of CTIA, it could make sense to announce something.  Adding to the rumor of an impending launch, a CDMA version of the Nexus One has recently cleared the FCC.

Vodafone customers will need to wait just a bit longer as it’s being reported that the handset will go on sale in April.  According to the Telegraph, the phone will be only available through the google.com/phone outlet and priced “very similarly to comparable smartphones such as the iPhone.”

For those not familiar, the Nexus One sells for $529 unlocked and $179 with a 2-year contract on T-Mobile.