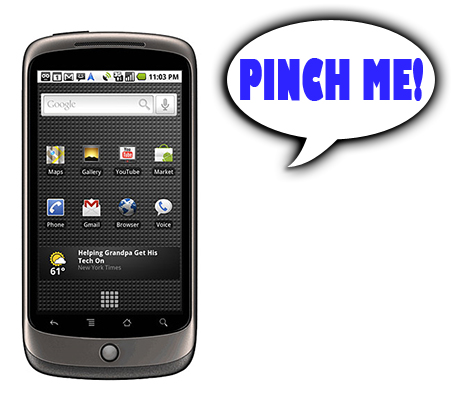 Looks like Google won’t be having any of that backtalk from Steve Jobs after all. According to the Nexus One News and Updates page, Google will be rolling out an over-the-air update for the Nexus One beginning today. Some may not receive the update until later in the week. The update is said to include some new features, as well as bug fixes.

Here’s what Nexus One-ers can expect:

Google Goggles: this mobile application will now be available directly on your device by launching it from your All Apps menu. Just use your Nexus One camera to start searching the web

Google Maps: the Maps application with be updated to a new version, Google Maps 3.4, which will include:

Pinch-to-zoom functionality: devices will now include a new pinch-to-zoom mechanism in the phone’s Browser, Gallery and Maps applications

This OTA update is sure to shake things up a bit. Google has been extremely vague and shady when it’s come to speaking about pinch-to-zoom and other multi-touch gestures. Cyanogen has already enabled these gestures for the “rooting” community, but it requires you to load his custom ROM onto your device. This update is long overdue, but probably the most welcomed update in Android history. It’s sure to shun all the non-believers who said that Google was scared of Apple. Looks like the gloves are off.

Video below, courtesy of Engadget: