Well, the title kind of says it all. The high honor isÂ beingÂ claimed by MoDaCo’s founderÂ Paul O’Brien, who reported on a thread back at his site, he had created “Superboot”.

SuperbootÂ is a boot.img that when flashed, will root your device the first time you boot

The news was broken by Engadget yesterday afternoon, they includedÂ this picture from forum user Stericson asÂ confirmation of the achievement. 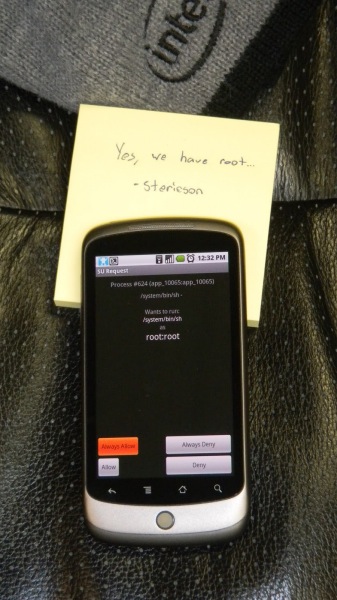 If itÂ weren’tÂ for Paul’s reputation on the mobile space I would say this isÂ totallyÂ bogus, especially since Stericson is already saying on his Twitter account that the root hack won’t work on the device once it goes on sale

I hate to kill everyone’s high, But the root that we managed to get on the Nexus root Probably will not work on the shipped phone.

Only time will tell…