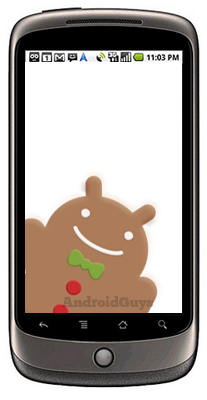 We cannot confirm this 100 percent on our end, but rumors are circulating that the Nexus One is already getting the Gingerbread update today.  We’ll definitely let you know for certain once we gather more information, but this news is likely going to make a lot of you guys happy campers.  Obviously not everything is going to be the same as the Nexus S, due to hardware like the NFC chip, but the improved UI and tools are going to give the phone a boost in performance.

Reto Meier, a name that should be familiar to Android enthusiasts, is throwing cold water all over the rumor. According to him, the Nexus One is not set to receive Gingerbread (Android 2.3) until a few weeks from now.  We’re gonna side with Reto here as he is an Android Developer Advocate for Google and a developer as well.  He knows a thing or two about a thing or two.

Not sure where Engadget is getting their reports. The Nexus One OTA isn’t happening just yet – should be coming in a few weeks. – via twitter