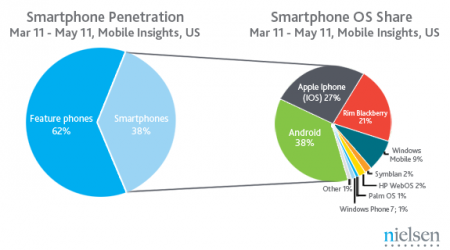 Nielsen has found that more than half of all U.S. consumers who purchased a cell phone in the last month bought themselves a smart phone. At 55-percent, this is up considerably from last year’s 34-percent and could be the first signs of a tipping point for smart phone adoption. Considering so many carriers offer free or low-cost Android devices, it’s hard to justify not buying one.  Overall, smart phones now account for 38 percent of all cell phones in the United States.

Breaking down the smart phone field, Android continues to lead all platforms with a 38-percent share.  Apple trails at 27-percent while RIM has dipped a few points to 21-percent.  Rounding out the other players are Windows Mobile (9%), HP Web OS (2%), Symbian (2%), Windows Phone 7 (1%), and Palm OS (1%).

Looking at the last three months, Android’s shares have been generally flat while iOS has lead smart phone growth.  Could this have been a result of the Verizon iPhone or has Android leveled off?  Have we already seen the glory days of Android? 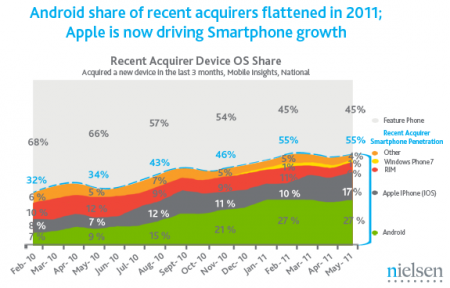 comScore: Android holds strong at 53.4% of the mobile market