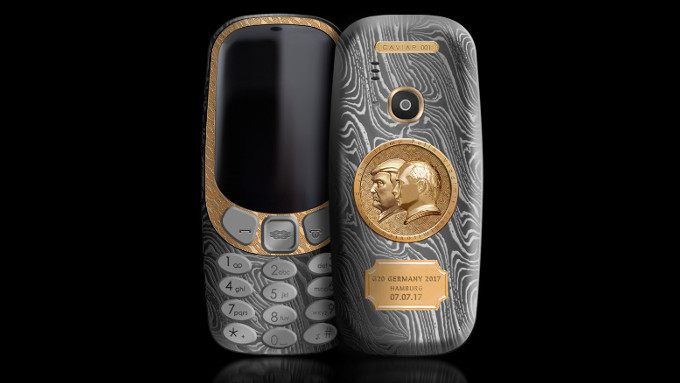 Back in February at MWC 2017, Nokia introduced a new version of the popular Nokia 3310 feature phone. The phone currently sells for around $50, but in the weird land of Russia, a company has unveiled a limited edition of the same device that costs a whopping $2,500.

At this year’s G20 Summit – an international forum for the governments and central bank governors from 20 major economies – Presidents Donald Trump and Vladimir Putin met for the first time. And in order to commemorate this historic event, Russian luxury company Caviar released the premium Putin-Trump Summit edition.

The Nokia 3310 Putin-Trump Summit edition boasts a sturdy titanium body which is coated with a “Damascus Steel” pattern. And on the back, Caviar included a gold-plated circular emblem depicting the profiles of the two Presidents in the communist portrait fashion. Below it, a golden placard marks the date and venue of the event (07.07.2017)!

If you don’t appreciate having Trump on your phone, then you should know Caviar also offers a Nokia 3310 Supreme Putin edition. Both phones come with the same exorbitant price tag of approximately $2,500.

And in the eventuality you’re not a fan of feature phones or Nokia in general, you have yet another alternative. Caviar also sells iPhone 7s that boasts the very same engraving on the back.