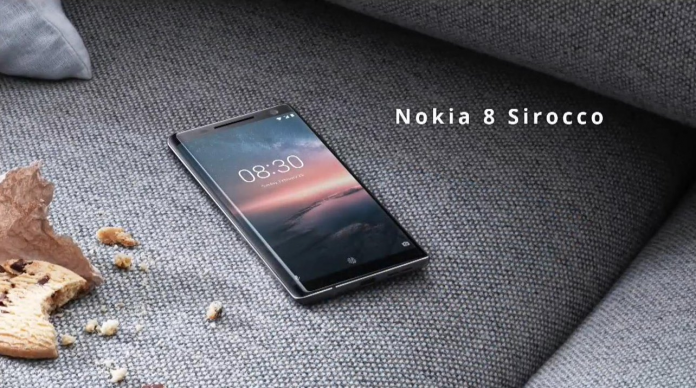 Ever since HMD Global’s acquisition of the naming rights to Nokia, the world has been patiently waiting for the company to release a device that will compete with the likes of Samsung and Google. HMD Global positioned Nokia originally as a budget device manufacturer, and it’s worked as Nokia now officially claim 1% of the Android smartphone market. The wait for the flagship is over as the Nokia 8 Sirocco has been unveiled at MWC 2018.

The Nokia 8 Sirocco features a 5.5-inch edge-to-edge pOLED panel with a 16:9 2560 x 1440 resolution built from Gorilla Glass 5. There’s a dual camera setup on the rear that features a 12-Megapixel and 13-Megapixel telephoto lens with Carl Zeiss optics. The device also features QI wireless charging and IP67 waterproofing. The Nokia 8 is powered by the Snapdragon 835 and 6GB of RAM with 128GB of storage and a 3260mAh battery. Unfortunately, there’s no headphone jack but you’ll get a USB-C converter as standard in the packaging.

The Nokia 8 Sirocco is part of the Android One initiative, which guarantees a bloat-free consistent hardware experience and timely updates. It has Android 8.0 Oreo out of the box with 8.1 presumably on its way not too far behind.

While the now out-of-date chipset means it won’t be competing with the likes of the Galaxy S8, it is a premium device that offers a spec sheet that many Nokia fans will be satisfied with.

The device launches in April for €749.