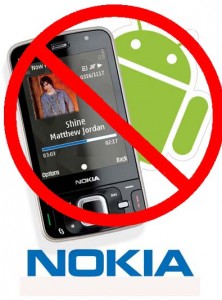 What do you do when you think the ship you are navigating is sinking? Do you go down with the ship like the guys on the Titantic, or do you look for a life raft? Well, despite all the warning signs that Nokia has been receiving over the past 2 years, they are going to stick with their sinking ship, Symbian. Okay, to be fair they will not just be using Symbian, they will also be using MeeGo. Symbian has been the worlds leading OS for a long time, but recently has been feeling pressure coming from the new kid on the bock, Android. Android has been in phones for 3 years now and has all but taken over the top spot from Symbian.

So Symbian is a dying OS, and everyone knows it, even Nokia skipped over Symbian to use MeeGo on their high-end N series of phones. So what is the problem with MeeGo and why should Nokia have chosen to leave MeeGo in the dust and hop on board the Android express? Well its simple, the Android Market.

Okay, now I know at first glance that might sound ridiculous, but its true. There will never again be a smartphone without some sort of app store attached to it, heck pretty soon there won’t even be a feature phone without one. So it becomes a game of where do the developers want to go. Sure the Android market has problems, lots of problems, but do you know what else it has, lots of users. Currently Nokia has the OVI store, which is nothing to write home about. Really no phones have an App store that is much to care about except the Android Market, and Apple’s App Store. In my opinion this was the biggest reason the Palm Pre/Pixi never took off either. Developers want to go where the platform is easy to work on, and where there are the most potential downloads. Android has both, and I have a hard time seeing a 3rd or 4th app market having any success.

Nokia should just look at Motorala to see what Android can do for a company. Motorola used the Android platform to get off the mat and get their legs back underneath them again. Well they have done so, and then some. Motorola reported a net profit of 109 million dollars in the third quarter compared with 12 million dollars a year ago. Or look at the success that a little company like HTC has seen with Android by its side. HTC recently announced it expects fourth-quarter revenue to more than double to 100 billion New Taiwan dollars (US$3.27 billion) from NT$41 billion a year earlier. But no, Nokia is determined to see this ship sink all the way to the bottom.

Via [The Wall Street Journal] [MeMyselfAndroid]