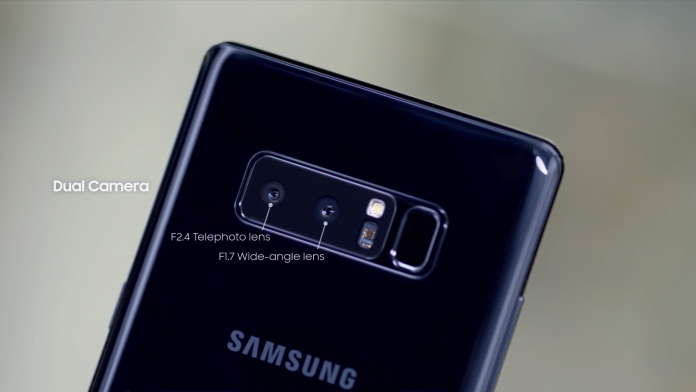 Like many who received their new and shiny Note 8 this past Friday, I’ve been profoundly enjoying playing around with this fabulously engineered device over the past few days. But the brakes came on when I was playing with the zoom toggle and made an dismal discovery – the same sensor was being used when pressing the ‘x2’ toggle. While in ‘x1’ zoom, I covered the outermost lens (the secondary telephoto lens) and pressed ‘x2’ and expected to see darkness from my finger as the system switched to the telephoto lens, but no. What gives?

Then I thought, maybe I’m stupid and that’s not how it’s supposed to work. I scurried back through news outlets that covered the Note 8 and sure enough, everyone I see says that the ‘x2’ button switches to the secondary, telephoto lens. Here’s some examples:

CNET: “When your first launch the Camera app on the Note 8, you’ll notice a new button with the label of X2. This button will activate either respective camera, depending on which camera you’re currently using. By default, the Camera app launches in X1 mode, thus the X2 button. Tap the button, however, and the button changes to X1 as the camera switches to the telephoto lens.”

Pocket-Lint: “To use that zoom lens is simple, as there’s a “2x” button in the viewfinder window. You simply tap this button and you switch to the closer view, it’s as simple as that.”

Independent: “Here, there are two lenses, each with its own 12-megapixel sensor. One is telephoto and one wide-angle. With one tap of the screen you can switch from one to the other, effectively giving the phone 2x optical zoom.

I then recalled Samsung’s new Live Focus feature, which enables more advanced bokeh’ing using the dual camera system. I toggled it and viola, confirmation that the telephoto sensor was operational. Phew. But still, why on Earth wouldn’t the ‘x2’ zoom button use the better sensor?

And that I found was exactly it – what “better” is. Recalling the camera specs, while the telephoto lens has awesomely maintained OIS, it unfortunately could not keep up with the aperture spec. Turns out that its significantly smaller lens aperture of f/2.4 does very noticeably make a turn for the worst when darkness falls, compared to the primary’s impressive f/1.7 opening. It seems that Samsung was very concerned about the zoomed in image quality.

Turns out, there’s an algorithm in place that automatically decides which lens to use depending on the lighting condition when you press that ‘x2’ button. In other words, Samsung is saying that in lower lighting conditions, the primary lens with digital 2x zoom is better than the telephoto lens at native, optical 2x zoom. Interesting.

While many would agree with this approach for the best image, I could imagine an issue with it being forced on us. What if regardless, we just want the ‘x2’ button to do what it’s supposed to and let us decide what’s better? This actually happens to be a common problem with a lot of automatic systems. Take LG’s implementation of the HiFi DACs in its phones, which automatically switches power (amp) output depending on the headphone impedance it detects. But some audiophiles were frustrated when they knew their lower impedance headphones could benefit from the extra power.

Fortunately in this case with Samsung, there is a mitigation, via Live Focus. The Live Focus mode will use the telephoto lens. The intent of Live Focus to make pretty background blur, but we can dial the effect down until it’s off. Not the ideal solution, but it is one.

Of course, Samsung could easily remedy this by adding an option to the camera settings that lets the user choose if the telephoto lens is used all the time with that ‘x2’ button, but who knows if there’ll be enough demand for that. I actually doubt many folks will know that this is even occurring.

What do you think? Do you like the automatic way that Samsung has handled the 2x zoom, or think that it’s misleading? We’d like to hear it in the comments section!