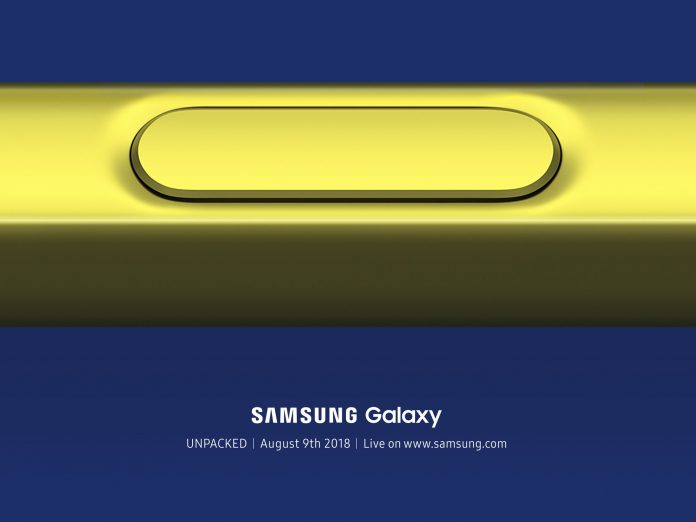 In a rather surprising move, Samsung has started rolling out invitations for an Unpacked event on August 9th. The reason for the surprise is because this is likely the launch event for the Galaxy Note 9.

Previous iterations were also unveiled in August, but none were revealed this early.

As for the invitation, Samsung shows off what appears to be an S Pen and it’s button. But the  unique yellow/gold color of the S Pen is interesting combined with the dark blue background.

The event will be held on August 9th in New York City. However, for those who can’t attend the Unpacked event, Samsung will be live-streaming the event online.

As for what to expect, the Snapdragon 845 will be at the helm combined with either 6GB or 8GB of RAM. The display is likely to measure in at around 6.4-inches, and will be a Super AMOLED panel.

For the past few years, Samsung hopefuls have been looking for a bigger battery. The wait be over with the Note 9 as rumors claim we could see either a 3850mAh or 4000mAh option.

Other than great hardware, Samsung is known for providing one of the best camera modules on the market. It’s extremely likely that we will see the same sensors featured on the Galaxy S9.

That means dual–12MP sensors with a variable f/1.5-f/2.4 aperture in the primary lens. Also, we’ll likely see a secondary 12MP telephoto sensor on the Note 9.

One of the biggest and best features of Samsung’s Note lineup is the S Pen. We are sure that improvements are on the way, but rumors suggest that the pen will include some Bluetooth technology.

We will have to wait and see what Samsung has been working on and the wait is almost over. In the meantime, let us know what you think about the Note 9 and if you are looking to get one.