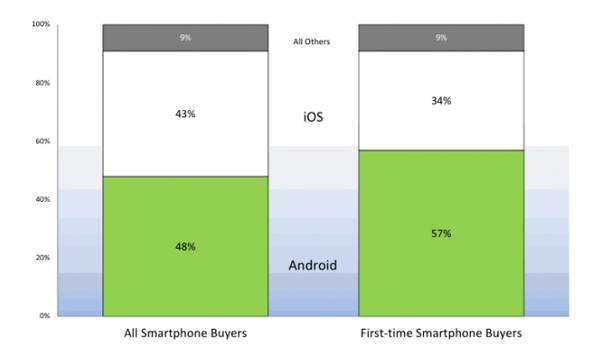 According to new data out of the NPD Group, nearly 3 out of every 5 new smartphone buyers are picking up Android devices. The information collected over the fourth quarter of 2011 tells us that people prefer Android 57% of the time, followed by iOS with a 34% share. Now before you say, “That’s one handset against a seemingly endless barrage of devices” consider that it factors in all flavors of iPhones. This means that between these two platforms we have 9 in 10 new smartphone purchases.

Looking at a more broad angle, Android accounts for 48% of the market share with Apple coming in a close second at 43% of the pie. It doesn’t take a rocket scientist to understand that the gap will continue to widen between these two just so long as people continue to turn to Android for new smartphones.

When it comes to specific models of handsets, however, Apple takes the top three spots. The NPD Group finds that the newer the iPhone, the more popular with the 4S leading the way. Android’s most popular model, the Galaxy S II, comes in fourth place, followed by the Galaxy S 4G.