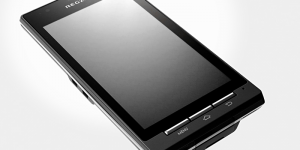 NTT DOCOMO just unveiled a boatload of new handsets and devices due in Japan over the next few months.  Among the 28 product announcements were three new Android smart phones.  Although pricing was not mentioned for any of the devices, we do have a very general idea (PDF) as to what to expect (PDF) when they roll out starting in December.

Next on the block is the REGZA Phone T-01C (Toshiba)which should arrive sometime between December and January.  The waterproof handset features a 4-inch full-wide screen,12 megapixel camera, 32GB microSD card, and the same support for mobile wallet, infrared communication and one-seg TV.  Running Android 2.1 out of the box, it is expected to see 2.2 in the spring of 2011.  Get yours in Moist Black and Mellow Bordeaux.

Finally, there is the Optimus chat L-04C which will debut in February.  The Android 2.2 smart phone features a QWERTY keyboard, 3.2 megapixel camera, and 2GB microSD card. Look for this one in White Silver when it shows up next year.