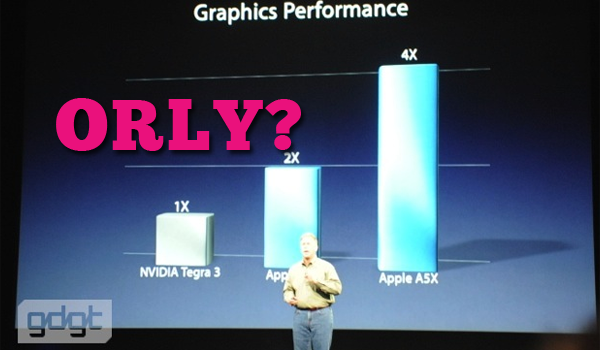 NVIDIA, like most of the plugged-in world, noticed that Apple announced a brand new, incredibly awesome iPad yesterday. As part of the unveiling, Apple advised that the graphics prowess of the new tablet was far superior to anything else on the market.  Yep, even the NVIDIA Tegra 3 chipset that’s just getting started.

Claiming that their chipset was at a  fourfold speed advantage of the Kal-El stuff, it sounds like the best thing going for mobile gamers.  NVIDIA, however, doesn’t know where Apple got their benchmarks, and would love to learn more.

Speaking with ZDNet yesterday, NVIDIA’s Ken Brown, admitted that while it was “certainly flattering” to be called out by Apple, the company wants to know how the data was compiled.

“We don’t have the benchmark information,” said Brown. “We have to understand what the application was that was used. Was it one or a variety of applications? What drivers were used? There are so many issues to get into with benchmark.”

It’s worth pointing out that the presentation slide during the keynote was void of any actual source or benchmark numbers. In past instances we would at least see a footnote or source as to where it was culled, especially if it was done via third party.

Was Apple telling the truth when they boasted the 4X performance?  Should they come clean with the figures?