A smart tv is good, but a smart tv with Android could be great.  Nyxio Technologies is formally announcing the debut of their latest edition to the 2012 product line, The Nyxio Smart TV with Android OS.  Ranging in sizes from 21″ to 65″, the whole line will come with HD/LED technology along with touchscreen capability.  Nyxio believes this to be a one-of-a-kind Android product and with full access to the Android Market it sounds very interesting!

“Apparently it’s hard to keep good news secret these days,” said Giorgio Johnson, Nyxio founder and CEO. “In any case, we’re even more excited now as the news comes out about what we believe to be the first and only Android product of its type delivering Internet and television viewing convergence to the marketplace. Nyxio Smart TV with Android television viewers will now have access to nearly a half-million Android Store Apps including wildly popular games such as Angry Birds™ and Fruit Ninja™ as well as instant access to premium channels such as Netflix®, HuluPlus®, Amazon Prime, HBOGo® and others.” 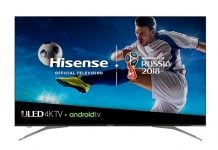