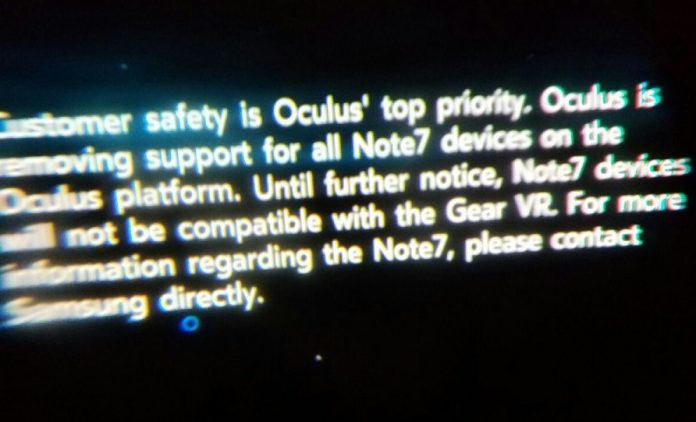 Oculus, the Facebook-owned virtual reality company has pushed an update that disables the Gear VR app on the Galaxy Note 7. The update was first spotted by Reddit user Bahaman 23 and later received confirmation from a number of users.

The move makes sense given the fiery issues the Galaxy Note 7 has been confronted with in the past two months. Samsung partnered up with Oculus on the Gear VR and an updated version of the headset was released with the Galaxy Note 7.

Last month, Oculus was advising users not to use the Note 7 with the Gear VR until they received their replacement.  However, now we know these new phones are riddled with the same issues, as reports of replacement phones catching on fire continue to roll in.

So Oculus is taking the next logical step by disabling the Gear VR app altogether, thus making sure users don’t hurt themselves. The virtual reality headset puts the phablet in an extremely dangerous position – in close to the user’s eyes, so Oculus is doing all in its power to avoid any unwanted accidents. Currently, the app is no longer loading, showing this message instead: “until further notice, Note 7 devices will not be compatible with Gear VR.”

Samsung itself also issued a statement urging users to power down their original Galaxy Note 7 or replacement Galaxy Note 7 and to take advantage of the remedies available, including requesting a refund on their purchase. The Korean tech giant has also asked all global partners to stop sales of the device until further notice.

Samsung explains it is working with the US Consumer Product Safety Commission to investigate the problem and hopefully solve it. No word on how long the examination is going to take, but we’re guessing this time around Samsung is hoping to get rid of the problem once and for all.

The Galaxy Note 7 is not the only device the update Gear VR works with. Even if the flaming phablet is out of the picture, for now, users can still pair the headset with other Samsung smartphones including the Galaxy S7, S7 Edge, S6, S6 Edge and Note 5.