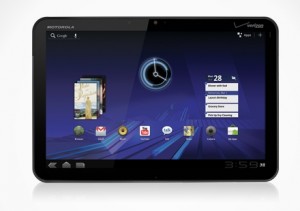 Before I begin, I want to point out that this is an opinion piece, and does not necessarily represent the opinions of everyone here at AndroidGuys. In fact, I know many people within the Android community will disagree with me. With that said, the following are my thoughts on the Moto Xoom Android tablet. Granted, I only got to play around with one for 5 minutes in my local Verizon store, so it’s not a full review, just my first impressions.

I’d heard from people that went to CES and saw the Xoom and it’s “amazing” hardware that it couldn’t be beaten. I beg to differ. Now, I do have to admit that Motorola nailed it as far as design. The Xoom felt amazing in the hands, aside from a few issues that I’ll address in a moment. The back of the device felt firm and slip-free. This is one tablet that I wouldn’t drop very easily, and I’m a very clumsy person, so that’s saying something.

I’m not a big fan of 10-inch tablets, but Moto pulled this one off nicely. It didn’t necessarily feel bulky or lopsided as far as weight goes. However, when I first picked up the Xoom, I was surprised by how heavy it was. I wasn’t expecting it to be as light as a feather, but it was heavier than I would have liked. It actually felt just as heavy as an iPad, if not heavier. Obviously, the fact that it has a 10.1-inch screen contributes to this, but it was hefty nonetheless.

As for the screen, I found it to be a bit buggy. For example, when I tried to open up the Gmail app, I had to touch the icon several times before the screen registered the action. Of course, this was a display unit that 200 other people had played with before me, so the screen wasn’t exactly brand new.

The cameras were foggy at best in my experience. I tried taking a picture of the Verizon store with the front-facing camera, but ended up with several blurry shots. The cameras may not be a huge selling point for the average consumer, but for a person that does a good bit of video conferencing or takes a lot of self-portraits, the camera is important. Motorola should learn from this.

This was my very first chance to play with Honeycomb. I was so excited when I saw Andy Rubin demo it at the Dive Into Mobile conference back in December. Honeycomb made all the earlier Android versions looks like child’s play. Unfortunately, Honeycomb wasn’t all it was cracked up to be. At least, it wasn’t in my experience. I absolutely loved the overall UI. The soft blues and blacks were a nice touch, giving the OS an easy-going feel. The home screen UI was amazing, to say the least. I loved the widgets, the transitions between panes, and pretty much everything about it.

When it came to the functionality and how things worked, it was a different story. A clear example would be when I noticed that in the notifications area at the bottom right of the screen, there were “Updates Available” for some apps that were installed via the Android Market. So I selected the pop-up window, and expected to be directed to the Honeycombed Android Market. This was not the case. Instead, I was surprised and confused to see that it had opened up Google Maps, which was pointing to my exact location. While I was impressed with how nice Maps looked, I couldn’t help but wonder why it had sent me here instead of the Android Market. This is one answer I never found.

When opening the browser, I was somewhat impressed, yet somewhat unimpressed to find that it looked an felt exactly like Google Chrome. While i do love some Chrome browsing, I think Google could’ve spent the time to build a new browser that blends with Honeycomb. The dark green highlights and sharp corners clashed with the look of the overall UI of Honeycomb.

All in all, Honeycomb felt unfinished to me. Maybe it’s just me, but I felt like there were some missing pieces from Honeycomb that Google just forgot to include when they made Honeycomb.

Concluding, I didn’t hate the Xoom. Motorola did a great job (for the most part) of making a killer device to compete with the iPad. Google made a pretty awesome version of Android to run on said device. While both have their faults, they go well together. Does this mean I would buy a Xoom if I had the money? No, it doesn’t. Does that mean it’s a terrible device? No, it doesn’t. The Xoom just felt like it was released before it was finished. Whether this is Google’s fault, or Moto’s fault is irrelevant. The Xoom just isn’t ready for primetime yet. So, with all of this being said, bring on the agreeing or disagreeing (more likely the latter of the two) comments!