Good news for owners of the OnePlus 3 who are part of the closed beta group, as the Android 8.0 Oreo update has just started rolling out for their device. What about the OnePlus 3T and OnePlus 5 you might be wondering? They are expected to receive the latest Android update too very soon via their respective closed beta groups.

The new update for the OnePlus 3 weighs around 800MB and brings Google’s latest mobile OS version with it. However, keep in mind that the new build isn’t exactly stable – for example, NFC doesn’t work and Wi-Fi connection is spotty, while hotspot and Bluetooth are unstable. 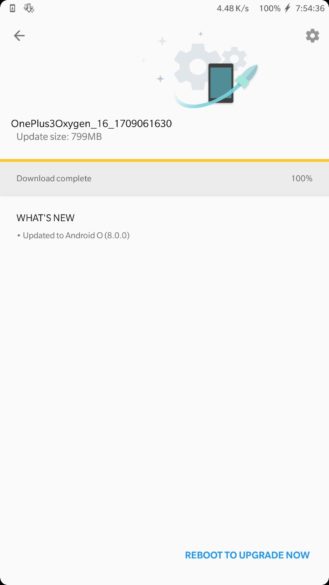 The Chinese smartphone maker is hoping it will be able to roll out a stable build by mid-September for OnePlus 3/3T/5 users in the closed beta group, with a public beta being released by the end of September. If everything goes well, OnePlus will become one of the first OEM offering the new Android 8.0 Oreo update to its customers.

Android 8.0 is going to be the last major update for the OnePlus 3 and OnePlus 3T, while the OnePlus 5 will live to see others.

So far other Android OEMs have pledged to update some of their models to Android 8.0 including HTC, BlackBerry, Nokia, and Huawei.