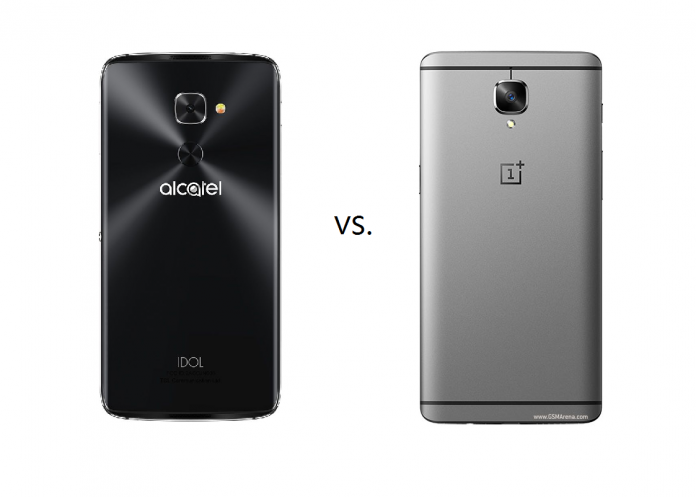 Just when I thought competition couldn’t get more heated, Alcatel called and said they want your money too! Joining the pool of $400 devices that seriously impress on paper, the Idol 4S will be shipping August 3rd with a bundled VR goggle headset and JBL earbuds. If that doesn’t sound tempting enough, Alcatel’s “midrange” handset is packing some pretty impressive specs. How does it compare to the OnePlus 3 at the same price? Check it out below. 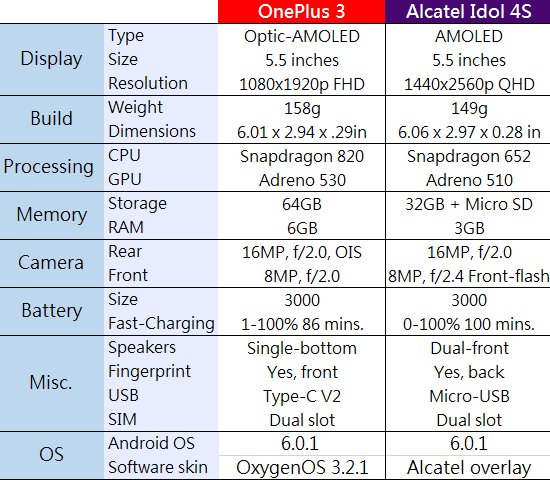 While the Axon 7 slightly beat the OnePlus 3 in terms of hardware, it’s more difficult to say this time around. Starting with the screen, OnePlus loses again in this category due to the choice of not including a higher resolution screen. The Idol 4S will take full advantage of its Quad HD display by offering customers a free VR headset when they pre-order.

Build quality will come down to a matter of preference. Quotes from first impressions state that the Idol 4S feels and even looks like the Galaxy S7 from the back due to the glass plates and metal frames. The OnePlus 3 offers the look and feel closer to an HTC 10, which Scott Webster highly praised during his review of the device.

In terms of performance, the OnePlus 3 wins, as Daniel Treccagnoli and I agree that it was one of the fastest phones we’ve ever used. While the Snapdragon 652 in the Idol 4S is apparently no slouch, with many claims that it’s just as fast as last year’s Snapdragon 810, the 820 chip paired with the Adreno 530 will perform better in daily usage and heavy gaming.

The OnePlus 3 offers more internal storage for the same price of the Idol’s 32GB, but the latter offers expandable memory up to 200GB. While the 6GB RAM may sound like a killer feature in the 3, the multitasking wasn’t much better than using the Nexus 6P (3GB RAM) during my couple weeks of usage, so the Idol 4S will do just fine.

The cameras should offer pretty similar results, however the OnePlus 3 includes OIS, which helps keep photos blur-free and stabilize video, while the Idol 4S does not. It’s worth noting the Idol 4S includes a rare front-facing flash for low-light selfies.

Battery life should theoretically be better on the OnePlus 3 given the lower resolution screen, but we’ll find out when we get our hands on the Idol 4S.

In terms of audio and media consumption, the Idol 4S wins by a landslide. Not only will the sharper screen be a big factor, but the dual-front facing speakers by JBL will provide loud, crisp audio when watching videos or playing games. Plus, the speakers are also projected our the back of the device for when you have the phone laying on it’s face. This is something we’ve never seen before, and sounds quite nifty.

Speaking of never seen before, the Idol 4S includes a “Boom Button” placed exactly in the center of the side of the device, which can be used in a variety of ways depending on what you’re doing with the phone. We’ll talk about this more in the coming review, but it’s features like this that makes the OnePlus 3 seem almost boring in comparison.

Overall, these two phones offer features and hardware for two different crowds. To summarize, the OnePlus 3 offers all the performance and software features that Android enthusiasts crave, while the Idol 4S offers an unrivaled media consumption experience. Both phones are packed into very minimalistic and premium packages, and you really can’t go wrong with either one.

Have you already bought the OnePlus 3, or are you waiting to see more of the Idol 4S?