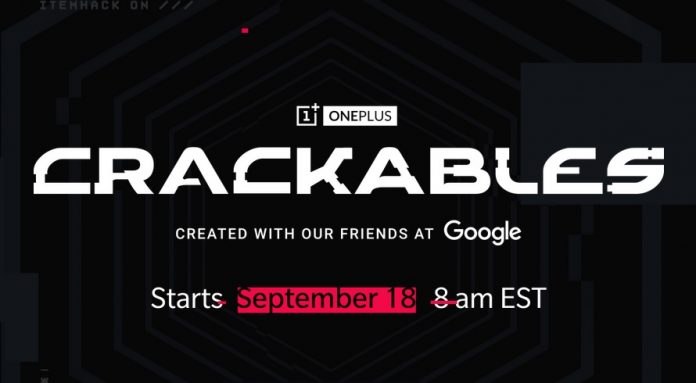 October is shaping up to be quite an interesting month for smartphone lovers. First off, Google is expected to unveil the Pixel 3 during an event on October 9. Then, if the rumor mill is correct, OnePlus will be taking the stage to launch its next-gen creation the OnePlus 6T on October 17.

Well until then, OnePlus plans to keep us distracted with something else. The phone maker just announced a new challenge on Twitter. It’s called Crackables and apparently OnePlus teamed up with Google for it. This is a game that fans will be able to start playing come September 18 at 8 AM EST.

Think you have what it takes to crack the code? Play #Crackables to find out. Starting September 18.

OnePlus is no stranger to this kind of tactics. At one point, the Chinese phone maker did a racing challenge in partnership with Gameloft which awarded a grand prize of $7,000 and a brand new OnePlus 6 + Bullets Wireless earphones. Sadly, the tournament was available only for Indian users.

Think you can crack the code?

Now it seems quite possible that OnePlus will be giving fans the opportunity to win an OnePlus 6T in the new Crackables challenge which will be available worldwide. So mark the September 18 date on your calendar and make sure you visit the official OnePlus page.

Earlier this week, OnePlus confirmed that its second smartphone of 2018, the 6T will have an in-display fingerprint sensor. The company revealed it has dubbed its implementation of the technology as Screen Unlock. Apparently, OnePlus was hoping to include in-display fingerprint scanning since the OnePlus 5T, but the technology wasn’t mature enough. Well, it seems that that’s no longer the case.

However, there’s a downside to this new tech. The in-display method tends to be a bit slower than the fingerprint sensors you’d normally find on today’s flagships.

Other specs expected to make it on board the new phone include a display with a smaller notch, a Snapdragon 845 and quite possibly a tri-camera setup.