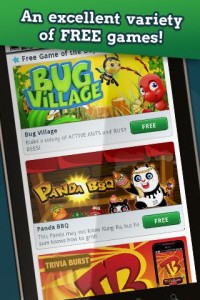 OpenFeint, the secret cross-platform sauce behind hundreds of Android games, has issued a press release today touting their new Game Channel for Android. Designed to both help players discover new games and highlight developers, it’s also a perfect opportunity for OpenFeint to thump their chest.  We can’t blame them though as they have more than 120 million users and a massive library that grows by the day.

It’s worth pointing out that some of you might be aware of the Game Channel application, having already installed it for yourself.  Yeah, we’re a bit hazy here too as this is actually the 2.0 release.  Nevertheless, we imagine a lot of you weren’t hip to the app before so that’s why we ran with the press release.

Burlingame, Calif.- October 13, 2011– Today OpenFeint, the world’s largest mobile social gaming network with over 120 million users, is announcing the launch of its highly successful mobile game discovery app, Game Channel, on Android.  Game Channel, which was previously available only on iOS devices, will showcase select Android titles through a number of creative strategies, with a focus on free-to-play gaming.

As the Android gaming market continues to mature and contend with the iOS gaming ecosystem, game discovery still poses a significant problem for Android developers and consumers. OpenFeint’s Game Channel app gives traditional and free-to-play mobile developers numerous promotional options to increase their exposure and grow their player base.

Featured Game: OpenFeint will highlight one premiere game, ensuring high visibility among gamers for an extended period of time.

Free Game of the Day: Following the successful free-game-per-day model on Game Channel for iOS, Game Channel for Android will feature new free-to-play games each day. Most games will include free in-app items, creating a big incentive for players to download new titles.

Curated Game Lists:  OpenFeint will highlight top Android games to make game discovery easy for gamers. Lists will change based on player feedback, but will include categories such as:

“We learned a lot about discovery on Android with our Spotlight app and with Game Channel on iOS, and we’re confident Game Channel for Android will be the best way for Android gamers to find new titles on the platform,” said Eros Resmini, senior vice president of marketing and developer relations. “As Android gaming continues to mature, Game Channel will provide an ideal solution for free-to-play developers looking for innovative distribution channels.”