The Chinese tech giant has just taken the wraps off the Neo 5 and its sibling Neo 5s. These handsets will target the mid-ranged marked and will compete alongside Xiaomi and Huawei. The all new 2015 Neo 5 offers a minimal upgrade over last year’s Neo 5. On the other hand, the Neo 5s offers pretty decent specifications for a budget-oriented smartphone. 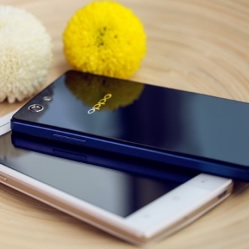 Now the main difference between these two is the different processor. The Neo 5 (2015) is powered by Mediatek’s quad-core MT6582 SoC along with dual-core Mali-400MP2 GPU. While the Neo 5s is powered by Qualcomm’s 64-bit Snapdragon 410 SoC along with an Adreno 306 GPU. Now the presence of Mediatek’s chipset makes the Neo 5 (2015) incompatible with LTE support. On the other hand, the Neo 5s is LTE compatible thanks to the Snapdragon chipset. Both the phones have 8GB of internal storage and can be further expanded with the help of a micro-SD slot. But here is the catch, even with the presence of micro-SD slot, the memory of the Neo 5 (2015) can only be expanded up to 32GB while, on the other hand, the memory of Neo 5s can be expanded up to 128GB. Thought the added memory support comes at the cost of a higher price.

In the software department, the smartphones are both running Android Kitkat 4.4.2 with Color-OS with no official word on an Android lollipop update. Oppo also cares for the health of its users and that’s why the company is also including an eye-protection feature embedded into Color-OS, which filters out all the harmful blue light that will allow you to use your phone for a longer period of time.

These two handsets have only just been announced by the company with no official word on release dates or prices yet. But it’s safe to assume that Neo 5s will cost a bit more than the Neo 5 (2015). In my opinion, the specs for both handsets are outdated, even for the mid-range category. If Oppo aims to be in the competition, it has to learn from other companies, which are doing great in the tech industry.

Are you willing to buy an Oppo device? Let us know in the comment section down below!