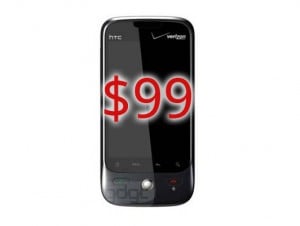 Peter Rojas, co-founder of Engadget, Gizmodo, and gdgt has just spilled some delicious beans.Â  A post listed over on a gdgt discussion board under the category of Droid Eris says that the handset will come in with the lowest price point of any Android handset yet.

Things are about to heat up, I just found out from a very trustworthy source that the Eris is going to be priced at $99 (with agreement) when it comes out. Nice to see an aggressive price point, especially compared with the Hero which goes for $180 on Sprint.

It’s a pretty safe bet that his connections are right.Â  As we mentioned before, even with a 528MHz chip and similar specs to the Hero, this phone will be a bargain and find a good sized crowd.Â  Let’s hope this rumor holds up and Verizon has two different price points next week for AndroidÂ  handsets.