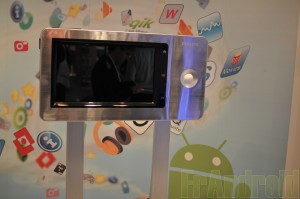 At their Winter Media 2010 event, Philips unveiled an Android-based media player/navigation device called the GoGear Connect. Due out in the summer, the unit features a 3.2-inch HVGA touchscreen, 8GB internal memory, WiFi and GPS. Using a microphone and a WiFi connection, it would be possible to make VoIP calls. The GPS component will allow the GoGear Connect to function as a personal navigation device. Other specs include haptic feedback, a front-facing camera, Bluetooth, microSD expansion (up to 64GB), and TV-output via (presumably) HDMI.

Philips has created a special UI (seen in video below) which sits on top of the Android 2.1 platform.  FIt’s being reported that the Android Market will be supported as well. Check back for more information, including pricing, as we can gather it.

This online training bundle is your project management golden ticket

Just $60, this 150-hour bundle will fast-track your project management career

Just $46, this 120-hour bundle is your ticket to a six-figure project management career