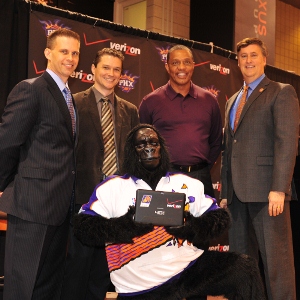 This one caught us a bit by surprise, but nonetheless, the Phoenix Suns have partnered with Samsung and Verizon to make the LTE Galaxy Tab 10.1 their tablet of choice when it comes to the day-to-day operations of the Suns. They plan to also use the Tabs at the U.S. Airways Center, to show fans the different seating arrangements around the stadium, which will help they better choose a ticket to buy. But Phoenix isn’t done there, as they plan to use the tablets to connect more with the Suns’ fans through social media during games, press events, and more.

In addition to all this, head coach Alvin Gentry and his staff will make the Galaxy Tabs an important part of the team’s preparation, both on and off the court. Each player will receive their very own Galaxy Tab, and every one of them will be preloaded with the Phoenix playbook, team videos from practices and games, travel itineraries for all trips, and scouting reports for upcoming opponents.

Phoenix’s President, Brad Casper, had this to say:

Our organization has always placed a priority on remaining at the forefront of digital innovation within the sports industry. Utilizing the Verizon Wireless 4G LTE network to integrate the Samsung Galaxy Tab 10.1 into our daily operations is yet another great digital milestone for the Suns.

Alvin Gentry said that today’s announcement “marks the beginning of a new era in the NBA, where I think teams throughout the league will want to integrate a tablet into their operations.”

So, do you think other teams will follow suit and adopt a tablet for their organization? If so, what tablet would you tell your favorite team to use? Let us know in the comments! The full press release can be found below.

PHOENIX – The Phoenix Suns, Verizon Wireless and Samsung Mobile announced today that the Suns have become the first NBA franchise to fully integrate wireless tablet technology into both their business and basketball operations.

The Suns are incorporating the Samsung Galaxy Tab 10.1 into business development opportunities, client and season ticketholder presentations, and in-game promotional programs. The team will utilize the tablet throughout US Airways Center on game-nights for more effective activation related to Suns partner initiatives, as well as showing prospective Suns ticket holders an interactive view of seats from anywhere in the arena.

In addition, the Suns are integrating the Tab into various elements of their TV and radio broadcasts as a way to interact with the club’s digital fans through social media and other in-game promotions.

“Our organization has always placed a priority on remaining at the forefront of digital innovation within the sports industry,” said Casper. “Utilizing the Verizon Wireless 4G LTE network to integrate the Samsung Galaxy Tab 10.1 into our daily operations is yet another great digital milestone for the Suns.”

Suns head coach Alvin Gentry and his staff will implement the tablet into all aspects of the team’s preparations, both on and off the basketball court. Each player will receive a tablet which includes a custom Suns playbook, video from team practices and games, team and individual scouting reports for upcoming opponents, and travel itineraries for all road trips. The Tab provides the team an environmentally friendly way of communicating with players and team personnel by eliminating volumes of paper communications.

“Today’s announcement marks the beginning of a new era in the NBA, where I think teams throughout the league will want to integrate a tablet into their operations,” said Gentry.

As the exclusive mobile provider of the Suns, Verizon Wireless is pleased to help bring forward, innovative, game-changing technology solutions, all backed by the largest and fastest 4G network in America.

“The Suns’ creativity and leadership, together with the strength of the Verizon Wireless 4G LTE network and the extensive capabilities of the Samsung Galaxy Tab 10.1 will no doubt be a winning combination,” said Verizon Wireless’ Danfield.

“The Samsung Galaxy Tab 10.1 hosts an impressive array of technology that will allow the Phoenix Suns to collaborate, share, interact and prepare for games in ways that were impossible before,” said Bidan. “Not only will the Phoenix Suns be untethered from the traditional hard copies of their playbook but the Tab 10.1 will also provide the Suns with a premium and truly mobile, multi-media experience over Verizon’s 4G LTE network.”