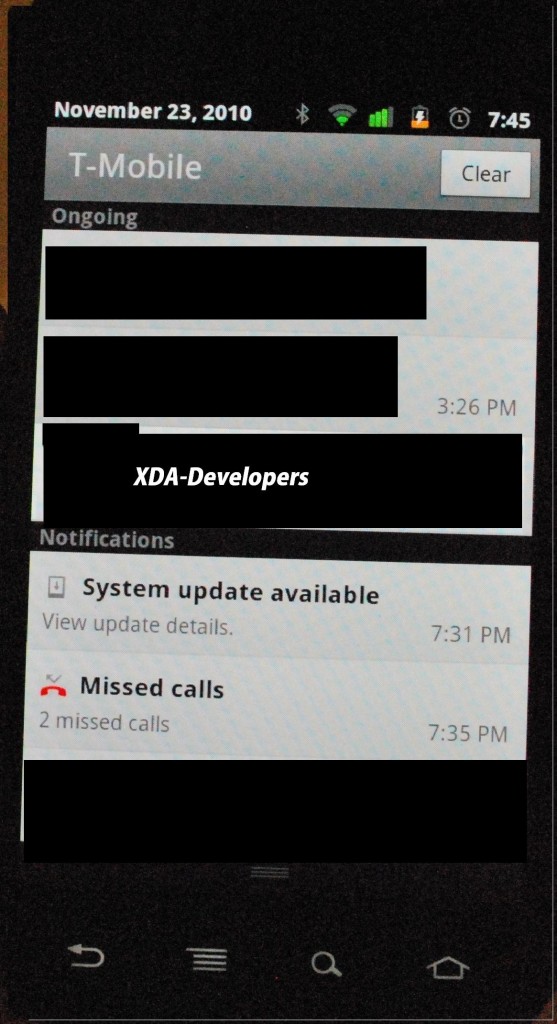 Well if this ain’t the best gift to get Thanksgiving off on the right foot, I don’t know what is. Our buddies over at XDA have scored some legit shots of Gingerbead and the Nexus S; and get this… they’ve got more on the way.

Right off the bat, you’ll notice the phone is running on T-Mobile (which we already knew). You’ll also see that OS version is most certainly 2.3. Noticeable, there are basic teaks to the UI, including a new taskbar, heavier green in the launcher icons, and the same overall style as found in the latest Google Maps update.

One of the photos shows the newly skinned dialer. It’s unclear from the photo if it allows for T9 enabled address book search like HTC Sense provides, but it would sure be nice if it did. There are also a bunch of things blacked out in the pictures. One of them even shows a blacked out icon title. Perhaps there are some interesting new apps that Google doesn’t want the public to know about yet. Whatever the reason may be, it’s pretty exciting.

With all the recent Android Market changes and word of a Gingerbread announcement in the next few weeks, it would make sense that Andy Rubin unveils the build on December 6th.

According to XDA, the known specs for the Nexus S are as follows:

Enjoy the pictures in the gallery below. They’re as juicy as a good ol’ deep fried turkey.

UPDATE: XDA’s source has apparently confirmed that the device is sporting a “Dual Core Orion 1GHz CortexA9” processor. Also, in reference to one of the commenters below, I wanted to make it known that the Nexus S will have a front facing camera. It was likely omitted from the original XDA post due to it already being a known thing.

Thanks for the tip, Siddharth!