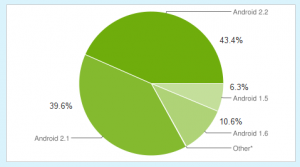 As we near the impending Gingerbread announcement and its subsequent rollout to handsets, the legacy builds of Android will continue to dwindle.  Newer, more popular phones with later versions of the platform will rise up to account for more market share.  Take Froyo for instance.  Announced back in May, Android 2.2 now accounts for more than 43-percent of the Android pie.  And with Eclair, (2.1) commanding over 39-percent of the market, Android 2.x can be found on better than 4 out of 5 devices.

We could be a few months off before we see Gingerbread (2.3) begin to show up on this chart.  By then, more Motorola phones will make the jump to 2.1 and carriers will be rolling out 2.2 devices for quite some time.  Thanks to the success of low-cost Android smart phones like the Optimus line from LG, Froyo could be on top of the pile for quite some time.  At some point, hopefully, those using Cupcake (1.5) and Donut (1.6) builds will either get a long-awaited update or simply upgrade to a new Android device.